What accounts for the variable alkaloid profiles of Kratom?

Kratom seems to vary considerably by vendor, strain and even by batch from the same vendor using the same source farmer. Lab tests posted by vendors online demonstrate this phenomenon. Since genetically all cultivated Kratom is the same, it's been somewhat of a mystery as to why this variance in alkaloids exists.

Recent studies indicate that natural photooxidation of Mitragynine (the main alkaloid) converts it to 7 Hydroxymitragynine, a very strong opioid. Different levels of oxidation would yield a different alkaloid profile. In an attempt to find consistency, the industry has resorted to mixing sun dried kratom and dark dried kratom in various proportions to make "strains".

Researcher Chris McCurdy found little to no Mitragynine in the fresh leaves of younger plants. This could mean that the alkaloid profile changes according to maturity, which could further affect the alkaloid profile. "Bunk" or ineffective Kratom could be a result of harvesting immature plants.

Whatever the case, we know that these differences are not due to genetic variants, or "strains" like the misinformed Kratom community, at large, seems to believe. If you were to look back through earlier posts from 2016/2017 you would not find a shortage of claims to this effect from this blogger. So, if you rule out genetics from having an effect on the profile, what else could account for the differences?

The key to potent opioid Kratom appears to be maximizing oxidation of the leaf. Since Oxidation of the dried leaf material could continue to oxidize indefinitely, storage with good airflow and light could continue to convert the leaf. The assumption that red has more potent opioid effects seems to be true as per Lab test results. These amounts are small, but the difference in effect seems pronounced demonstrating how potent this alkaloid is.

Another recent study actually found that the liver metabolized Mitragynine into 7ohm. This would explain why fresh leaf, as used indigenously, would still have such strong analgesic effects. Since in fresh leaf, they found little to no 7ohm. Even if the conversion is inefficient, 7ohm is so strong that even small amounts would make a noticeable difference in opioid receptor activity.

Mitragynine also effects other Central Nervous System receptors like the neurotransmitters dopamine and serotonin. It also appears to be responsible for the stimulant effect by inhibiting adenosine much like coffee. So, to maximize any of these effects one would prefer an indoor dried, unoxidized leaf which has the most Mg (up to 2/3 of total alkaloids). Antogonism at those receptors increases dopaminergic, serotonergic release. Kratom extract helped alleviate Psychosis in Rats.

7Hydroxymitragynine seems to be maximized when leaf is exposed to the sun allowing for maximum photooxidation with the phytochemicals within the leaf. Kratom leaf that is red has been dried for 4-5 days in plastic bags. The assumption that it has maximum 7ohm despite the anaerobic conditions inside the plastic bags. This is partially because that alkaloid is orange in color. So, the assumption is that as the color turns red, there is oxidation converting the green/yellow Mitragynine.

As far as the other 39 some odd alkaloids, nobody has a clue as to how they are produced by the plant. Of particular interest in Cancer research is the alkaloid Mitraphylline, a strong antiinflammatory. It has shown much promise in treating several cancers. It appears that there is a correlation between inflammtiion and tumor growth.

"Interestingly, it was also found that this photooxidation reaction could take place at room temperature under sunlight illumination, with no need for the addition of an external reducing agent, albeit in low yield (8% by NMR). Therefore, it is conceivable that a similar process occurs in the plant itself, or more likely, in dry leaf material that has been exposed to air for considerable periods of time, with strongly colored phytochemicals (e.g. porphyrins) serving as a substitute for rose bengal. This phenomenon may account for the observation of 7-OH in some samples of Mitragyna speciosa, but not in those analyzed in the present report. " (J.Am.Chem. Soc. 2016, DOI: 10.1021/JACS.6B00360 ) 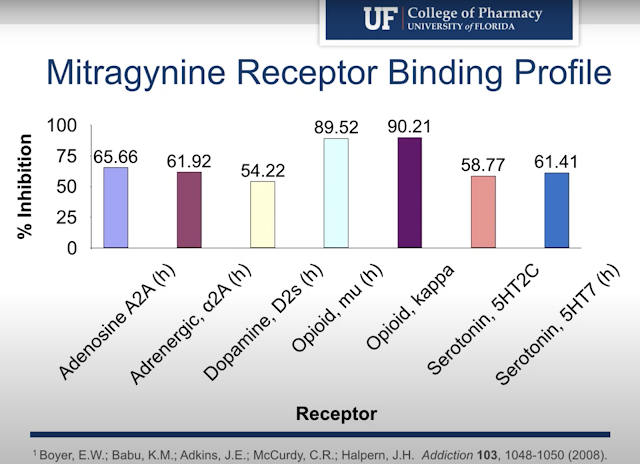